The Beauty (and heat) of Macau

By © Keryn Means/ Walking On Travels

Me and my boy take in the historic sights of Macau

Macau is gorgeous. If you look past all of the casinos and wander some of the back streets and stick to the historic sights, you may almost forget that you are in Asia, and think you are walking the streets of Lisbon.

But then of course the high-noon heat does start to get to you. And the crowds. You’re dripping with sweat as you hike up to the Ruinas de S. Paulo (Ruins of St. Paul’s), and if you are like me, you are wondering why in the world you did this as a day trip. My mind must surely have been fried by the sun from the previous day’s excursion.

This was the first point on our trip where I truly thought, where is my husband? Why isn’t he here to help me or talk me out of getting on a ferry at 10am, skipping nap time and then walking around in the sun at noon with a 2 year old? I had missed Mike before now, but I remember standing in Largo do Senado wishing he was there to help me with Dek, get into a cool restaurant, and stop trying to see everything, so I could get back to the hotel in time to squeeze in a late afternoon nap. 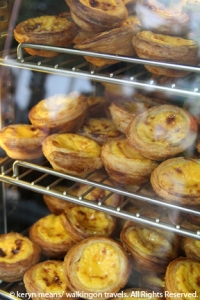 We had some fun, we just didn’t get to see very much. Being map challenged and even “signs pointing you to where you are supposed to go” challenged, didn’t help matters either.

When we finally arrived in Macau, and I navigated the bus system (not hard if you know what ferry terminal you are actually at), we stopped for an egg custard, which Macau is known for. They were hot and delicious. Dek wanted no part of it, so I ate two all by myself, while he had a few goldfish snack crackers and a banana. I took a few pictures in Largo do Senado, but it was almost noon, so the light was horrible.

We started wandering down the street and I spotted a girl with a big to-go cup of fruit. I knew there had to be a fruit, and hopefully juice stand, somewhere close by. I cut down a side street and found the fruit vendor, loaded up on mango juice and watermelon, and then continued to explore the side streets off of Largo do Senado.

Taking a break on the steps to Ruinas de S. Paulo

The main reason I had wanted to go to Macau was to see the Ruins of St. Paul’s. I had seen a picture and was fascinated. There was a facade of a church just standing there. The original building had been destroyed by fire in the 1800s and had never been rebuilt. According to the tourist map, “the facade of the Ruins of St. Paul’s functions symbolically as an alter to the city.” It may be an alter to the city, but it’s also a tourist mecca. Crowds of people wind up the street headed towards the ruins. St. Paul’s is to Macau, what the Spanish Steps are to Rome.

People were sitting on the steps leading up to the ruins, taking pictures, eating, getting engagement/wedding photos taken and waving for friends to join them. Dek even had to pose with some of his fans. The ladies love my boy in Hong Kong, and now Macau.

Although the ruins were beautiful, they were in no way practical to visit with a stroller. The steps made it hard to walk up, even if I took Dek out of the stroller, since there were so many people crowded around. What I wouldn’t give for an extra set of hands. There was a street running along the side, but it was made of various stones and not smooth at all. I did schlep up that bumpy road though so I could get to the top. I wasn’t going to miss out on anything. 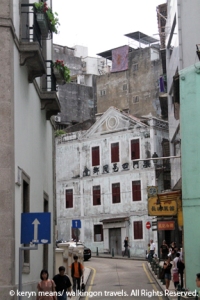 Back streets of Macau

By now, both Dek and I were pretty exhausted, stinky, and Dek was in serious need of a diaper change. I walked across the street from St. Paul’s where there was some shade and a walkway going up to the old fortress, Fortaleza do Monte. We pulled up to a park bench, I let Dek wander a bit and I cooled off in the shade. Since no one was around, I changed his diaper right there too. Sometimes I just don’t have the patience to find a bathroom, especially when most don’t have changing tables anyway.

We could not go all the way up to the top of the fortress, we only saw the base. There were too many narrow steps and it was just too hot to carry a heavy baby and stroller. I finally called it quits for the day. We had seen two things, but even I know when I’m beat. It was already almost 3pm, and Dek was melting down. We hopped the bus back to the ferry and were back in the hotel by 4:30pm. 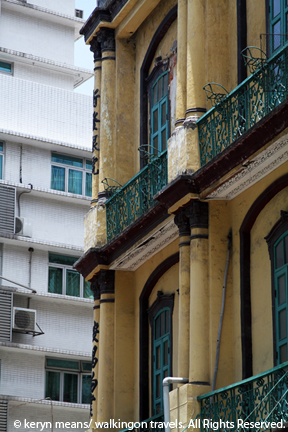 If and when I am back in Hong Kong, I would like to do an overnight trip to Macau. Plenty of people do it. Most go for the casinos. Macau is the Las Vegas of Hong Kong, but there is enough to see and do, I think two days would be a nice amount of time to wander around, especially with a small person traveling with us. Dek would get to nap and we could spend some time exploring once the crowds head back to Hong Kong at the end of the day.

This entry was posted on Saturday, May 14th, 2011 at 7:35 am and tagged with Macau, Photos, Travel and posted in Hong Kong. You can follow any responses to this entry through the RSS 2.0 feed.
« Getting to Macau
When McDonalds Might Be Necessary »